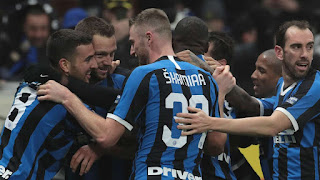 Stefan de Vrij and Romelu Lukaku scored in a thrilling Derby della Madonnina that saw Inter come from two goals down to win 4-2.

Inter came from two goals down to earn a famous 4-2 victory over Milan in a gripping Derby della Madonnina that sent the Nerazzurri top of Serie A.

Zlatan Ibrahimovic returned to haunt his former club with a goal and an assist for Ante Rebic as Milan raced ahead before half-time, but the 38-year-old striker could not maintain his unbeaten run since returning to San Siro in January.

The Rossoneri's hopes of causing an upset faded in the space of two second-half minutes that saw Marcelo Brozovic and Matias Vecino plunder quickfire goals to get Inter back on level terms.
Follow us on Google news, Twitter and on Facebook
Loading...
seriea