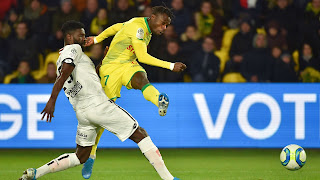 The Levante loanee drew the visitors level five minutes after Stephy Mavididi broke the deadlock at the Stade Gaston-Gerard in the 15th minute.

The strike was Simon's ninth goal across all competitions in this campaign and fifth on his 22nd appearance in the French top-flight.

He could not play for the duration as he limped off with an injury in the 43rd minute.

It ended 2-2 at half-time but late goals from Mavididi and Andre Girotto at the death of the game ensured the teams shared the spoils in Dijon.

The result stretched Nantes' winless run to five games in all competitions, and they are 12th on the Ligue 1 table with 33 points after 24 matches.