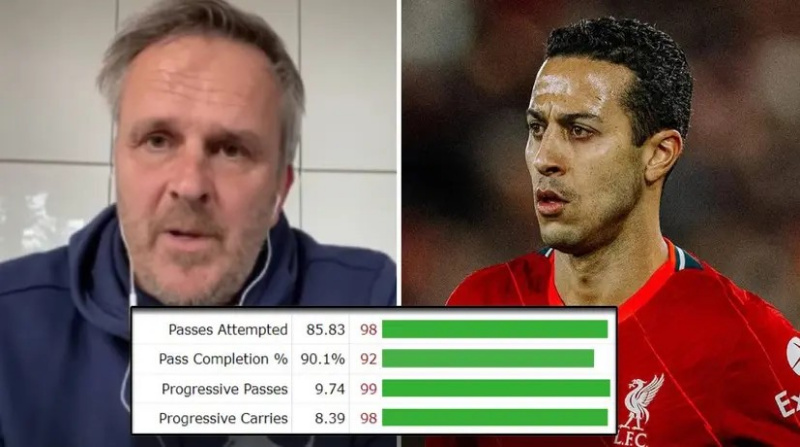 Former Red Didi Hamann had some bizarre comments on Thiago Alcantara last week. He said: "For me, Thiago is one of the most overrated players in European football.

"When things are going well and you have a lot of possession he's a good player, but when push comes to shove you don't see him. If you need someone who sets accents, then he doesn't do it."

Hamann's comments have understandably upset some Liverpool fans as Thiago was definitely one of our best players last season.

The former Red's opinion is indeed a strange one - let's take a deeper look into how impactful Thiago actually is for Liverpool.

He sets the tone in the midfield

Hamann's comment on Thiago 'not setting the accent' could not be more off the mark. In his debut game for Liverpool when he came off the bench against Chelsea in 2020, the Spaniard created a Premier League record for most passes in a single half with 75 successful passes.

That was just the sign of things to come as Thiago has shown us his best version in the season that just ended. Take a look at three important passing statistics as well as the progressive carries category for the midfielder as compared to other players in his position across Europe (via Fbref):

The closer the stat is to 100, the better the player is at this component. Thiago ranks among the top two percentile in the world in passes attempted, progressive carries and progressive passes.
Progressive passes refers to a pass that takes the ball closer to the opponent's box - think of them as forward, attacking passes that trouble the defence. Almost no one does that better than Thiago, as the rankings tell us.
So, not only does he pass the ball a lot, he passes the ball a lot into dangerous areas of the field, therefore creating attacking chances for his team.

He was never known for assists

If it is assists that Hamann is looking for, Thiago has never been a leader in that category. He averages around six assists per season since the 2012/13 season. When Bayern won the treble in 2020, Thiago played 40 games and only had two assists.
Moreover, Liverpool's system relies on wingplay: 34 assists combined from Trent and Robertson last season confirm that. The most assists a 'central' player has contributed is Jota -- eight.
We (or, rather, Didi) now know that Thiago doesn't assist his teammates that much. Here's a bit of a contradictory stat: Thiago creates 3.25 shots per game -- far better than any other Liverpool midfielder.
This means that at least three times a game Thiago makes a pass, dribble or draws a foul that leads to a shot. Some of those shots become assists or lead to dangerous situations.
The Spaniard himself is not averse to shooting. He takes 1.5 shots per game and it was his thunderbolt against Porto that fans voted the goal of the season in the Champions League.

His defensive contribution is underrated

Thiago's defensive contribution is an elite (and often underrated) part of his game and that hasn't changed since his move to Liverpool.

While Thiago is not the best tackler in the world as he has a subpar discipline record with the Reds (averaging one foul a game and collecting five yellow cards in the Premier League), his knack for intercepting the ball and pressuring opponents is often underrated.

He makes close to 20 pressures per game and was successful in 37% of his pressing actions last season, the second-highest success rate of his career. Moreover, he ranks amongst the top ten percentile in tackles made per game, as well as averaging 2.45 interceptions per game.

In contrast, here are Fabinho's stats in these three categories:

Fabinho makes fewer tackles and interceptions per game and Thiago is a huge reason for that. Thiago takes the burden off Fabinho so Liverpool doesn't have to rely on their defensive midfielder only to defend.

What's more, Thiago's defensive actions lead to his offensive contribution. He's quick on transitions, so when he wins the ball he aims to play it forward instantly. The nightmare scenario for the opposition is when Thiago cuts off an entire line and moves the ball up the pitch -- Bundesliga players know.

The stats prove that Thiago is a complete midfielder with a high influence on the game despite a few number of assists. He playmakes from the deep and statistically does more defending than Fabinho.

Hamann was way off the mark in claiming that Thiago is overrated - if anything, the Spaniard deserves more appreciation for how well he has adapted to the pace and physicality of the Premier League. Liverpool are lucky to have Thiago in their squad.