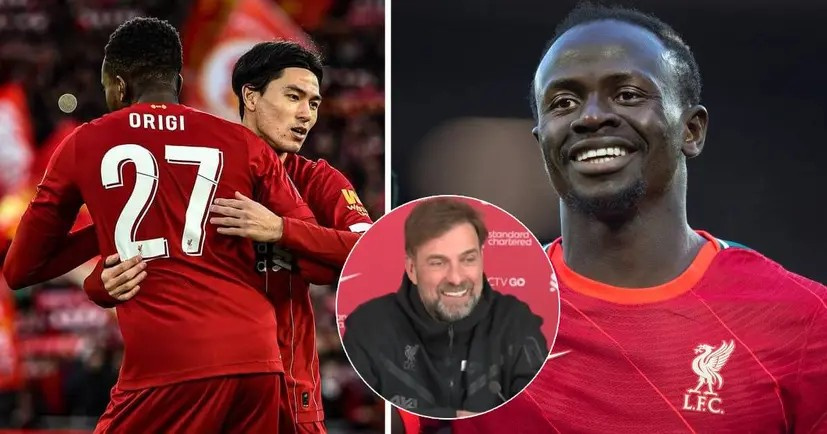 Liverpool will be without the familiar figure of Sadio Mane from next season, as well as Divock Origi and Takumi Minamino.
All three attackers contributed greatly to Liverpool's success and have moved on to new clubs this summer.
Jurgen Klopp was asked if he'd miss them during the pre-season games and further on, he replied: "Definitely. We are very thankful to the boys, it was absolutely great, their contribution was outstanding – all in a slightly different way.
"Divock [Origi] is a Liverpool legend definitely. When you think about Divock, you cannot avoid a smile, because so many great moments were only possible because of him.
"Absolutely outstanding. Like the shoulder/header at Newcastle; so many things; the goals against Everton; Champions League, the final. Absolutely great. We wish him all the best.
"Sadio, what can we say about Sadio, hey? What a player. A world-class player. He and we together reinvented him as a No.9 as well in the last season, which he played outstandingly well.
"As well a Liverpool legend, one of the all-time Premier League greats, I would say, with the numbers he has. A fantastic person as well. So, really happy for him that he is now at the club where he wants to be.
"He is very thankful for all the things we did, and we are very thankful. Now he is at another club.
"And then Taki – not that long here but a similar influence on the things we did. Won big trophies here. We became champions together when he came in the winter and then we won the domestic cups together, which we wouldn’t have won without him, that’s the 100 per cent truth.
"That’s how it is. For him as well, Monaco, good club, he will play there, he will have a great career from here on. He will always be welcome when he comes back, 100 per cent, a fantastic person.
"Players use that direction through the door and you bring other players in, and now we are very excited about the new team we can create."
We wish these three former Reds all the best with their new teams - hopefully, Liverpool can continue to be as great without them too.
Source: Liverpoolfc.com
Follow us on Google news, Twitter and on Facebook
Loading...