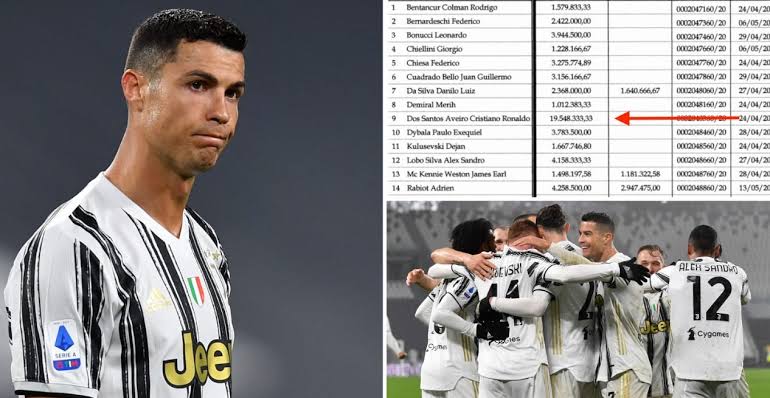 A number of Juventus players past and present – including Cristiano Ronaldo – could be banned for 30 days as part of the ongoing investigation into financial fraud.

Last week, the Italian giants were found guilty of transfer irregularities and deducted 15 points by the Italian Football Association’s sporting tribunal. That decision took them from third down to midtable.

Juventus released a statement insisting they would appeal the decision.

“Juventus Football Club S.p.A. (“Juventus” or the “Company”) informs that the Federal Court of Appeal, Unified Sections, having regard to the appeal for revocation pursuant to Article 63 of the Sport Justice Code brought by the Federal Prosecutor’s Office, declared the appeal for revocation admissible and thus revoked the decision of the Federal Court of Appeals, Unified Sections, No. 0089/CFA2021-2022 of 27 May 2022 and, as a result, ordered the penalty of 15 points in the standing for Juventus to be deducted in the current Sport Season and the temporary inhibition for the Sporting Director, Federico Cherubini, from carrying out activities in the FIGC context for 16 months, with a request for extension in the UEFA and FIFA contexts.

“Pursuant to the revoked decision, the Federal Court of Appeals had rejected the appeal (“reclamo”) brought by the Federal Prosecutor’s Office against the decision of the National Federal Court, which, in turn, had acquitted Juventus and the other parties charged for because of the lack of any disciplinary offence with regard to the evaluation of the effects of certain transfers of players’ rights on financial statements and the accounting of capital gains.

“The Company awaits the publication of the reasons of the decision and announces as of now the bringing of an appeal to the Sport Guarantee Board (Collegio di Garanzia dello Sport) in accordance with the terms of the Sport Justice Code.”

Could Juventus players including Ronaldo be banned?

But a point deduction may not be the end of the matter.

A new thread from journalist, Paolo Ziliani, on Twitter claims that a large number of players could be banned for 30 days as a result of the investigation.

He shared screenshots of Juventus’ balance sheet, and wrote (as translated by Google): “All disqualified. For at least a month. In this league. Maybe already soon. And yes, I know, it’s not trivial news. The Italian media tremble at the thought of giving it, but perhaps it is appropriate not to be squeamish: at least fainting like for -15 is avoided.”

Ziliani then produces a thread that explains the serious situation. It’s been broken down on Reddit.

“Another thing to add is that Juventus is a listed company, so off-balance sheet liabilities such as deferred wages are a big no-no. Juventus’ former president Agnelli and several members of the board/directors are being investigated for this as well. The thread above is only re: sporting justice and Juventus, not criminal justice for individuals.”
Follow us on Google news, Twitter and on Facebook
Loading...