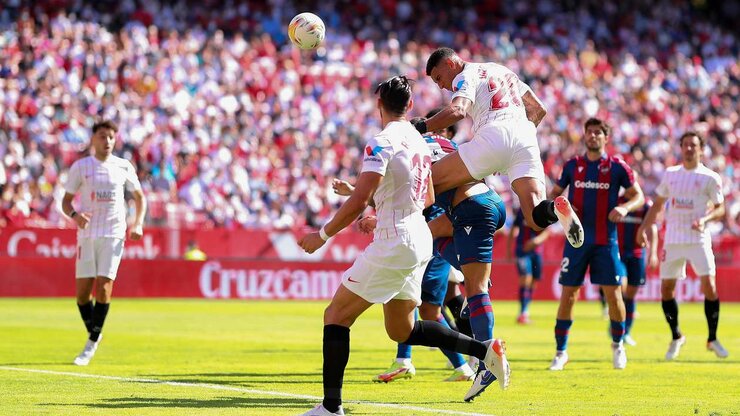 Sevilla and Levante played out a 5-3 goal fest to send Sevilla to the top of La Liga and extend Levante’s winless league run to 18 games.
The hosts started at a ferocious pace, encamping Levante deep in their own half, and it looked like it was going to be a long afternoon for the visitors when Óliver Torres scored a goal of the season contender eight minutes in. Ludwig Augustinsson’s corner initially looked overhit, but found the 26-year-old deep in the Levante area. Torres then struck an amazing volley into the top corner, stunning the entirety of a rapturous Ramon Sanchez-Pizjuan Stadium.
Things got even better for Sevilla 20 minutes later, Thomas Delaney found Rafa Mir in the box, who cut inside and unleashed a low shot which beat Aitor Fernández at his near post making it 2-0. Levante then managed to pull one back against the run of play, as Gonzalo Melero’s clever dummy allowed José Luis Morales to strike the ball into the top corner.
The hosts responded promptly to conceding what was only Levante’s third away league goal of the season, and just five minutes later, Suso’s cross was met by Diego Carlos, who powerfully headed the ball off the post and in to restore the two-goal cushion.
Sevilla started the second half as they finished the first, Munir El Haddadi scored his first goal of the season with a wonder strike from 25 yards out giving Fernández no chance. However, Levante were given a lifeline shortly afterwards when Marko Dmitrović's huge mistake allowed Morales to pass the ball into an empty net for 4-2. An astonishing game then took another turn through another Sevilla mistake, this time Diego Carlos lost the ball easily to Jorge de Frutos who then pulled the ball back for Melero to smash home.
The hosts scored again two minutes later, this time through Fernando, who met Jesús Navas cross to restore the hosts two goal lead. Levante then thought they had a penalty with ten minutes remaining but after a VAR review it was changed to a free-kick on the edge of the area giving Sevilla a huge let off. Sevilla’s 5-3 victory means they go right to the top of La Liga with 20 points from nine games, while Levante were left with nothing to show from their inspiring performance and remain 19th in the table.
Follow us on Google news, Twitter and on Facebook
Loading...