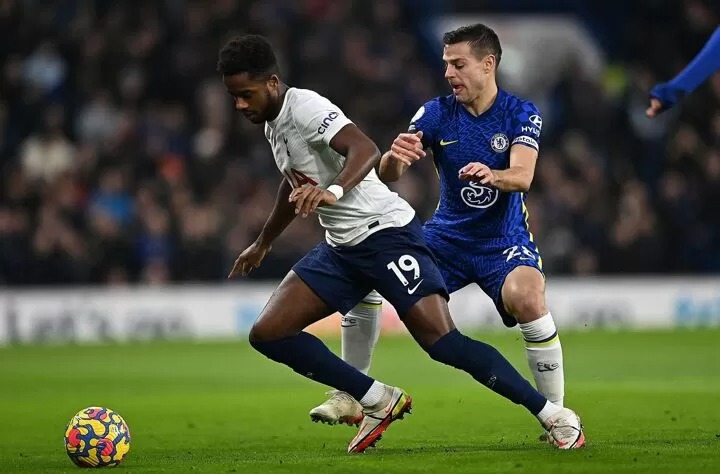 Chelsea will welcome local rivals Tottenham to Stamford Bridge on August 14. The Blues will be hoping to assert dominance over Spurs, who are one of Chelsea's bitterest rivals in the league.
Thomas Tuchel's team dominated Spurs in all competitions last season, with the Blues winning four out of four games, scoring eight goals and conceding none.
Ahead of the London derby on Sunday, Spurs will be hoping to redeem themselves at Stamford Bridge, and their desire for vengeance could make for a thrilling matchup.
Chelsea can't underestimate the Spurs, who got off to a flying start against Southampton on Matchday 1 with a 4-1 win.
However, Tuchel could make some tactical changes to the team that started against Everton last Saturday. As such, this article will take a look at three players who could be dropped from Chelsea's starting XI against Spurs at Stamford Bridge.
#3. Cesar Azpilicueta
If Chelsea are to get a favorable result against Spurs, they will need to contain 'The Lilywhite's free-flowing attack.
The north London club scored the most goals by a Premier League side in 2022, with 30 goals to their credit. They continued their fine form in front of goal this season by putting four past Southampton.
The combined age of Chelsea's back-three against Everton was 100 years. Thiago Silva, Kalidou Koulibaly and Cesar Azpilicueta are aged 37, 31 and 32 respectively. Hence, having an older back-three coming up against a very mobile and direct front-line from Spurs may be dangerous.
If Tuchel decides to make tactical adjustments to his back-three, that could see Cesar Azpilcueta being dropped to the bench against Spurs.
Azpilicueta could be replaced by Reece James as the right-centre-back. James can also better deal with the pace of last season's Golden Boot winner Son Heung-Min.
Recall that Tuchel experimented with James at right-centre-back against Real Madrid last season to check-mate Vinicius Junior, who is known for his speed.
#2. Ben Chilwell
Another Chelsea player who could possibly be dropped by Tuchel against Spurs is English left-back Ben Chilwell.
The 25-year-old full-back made his return from a very lengthy injury with a surprise start against Everton. However, Chilwell looked rusty and could possibly do with regaining the fitness he enjoyed pre-injury.
Against Spurs, Tuchel could opt to go with new signing Marc Cucurella in the left-back position.
Cucurella looked very sharp when he came on for Chilwell in the second-half of the game against Everton. He could also better contain the attacking threat of Spurs' right-wing forward Dejan Kulusevski, who has been sensational since joining Spurs on loan from Juventus in January. He scored five goals and provided eight assists in 18 Premier League games last campaign.
Kulusevski has already scored one goal and an assist and will be a constant threat at Stamford Bridge. Cucurella could be the man to neutralize the Swedish threat on the right-wing.
#1. Kai Havertz may not be Chelsea's best option at left-wing
Tuchel has a lot of attacking options at his disposal and could possibly make a tactical switch up front against Spurs.
The German manager went with a front-three of Raheem Sterling, Kai Havertz and Mason Mount against Everton, with Sterling playing in a slightly central position. However, the partnership didn't produce many attacking fireworks.
Against Spurs, it could be a different ball-game. Conte loves to rely heavily on his wing-backs to cause havoc against opposing teams. Hence, Tuchel will need to find a way to prevent the likes of Ryan Sessegnon and Emerson Royal from having a go at his defense.
One way to do this is by Tuchel deploying wide players who will keep the opposing wing-backs in their own halves. A player who could be sacrificed for this cause is Havertz.
Dropping the German winger could give room to Armando Broja, who is a more direct striker to play upfront, thus allowing Sterling to operate as a left-winger. Raheem's pace will keep Emerson-Royal from trying to overload the right flank with Kulusevski, just as they did against Southampton.
It remains to be seen what tactics both teams employ in pursuit of a win.
Follow us on Google news, Twitter and on Facebook
Loading...