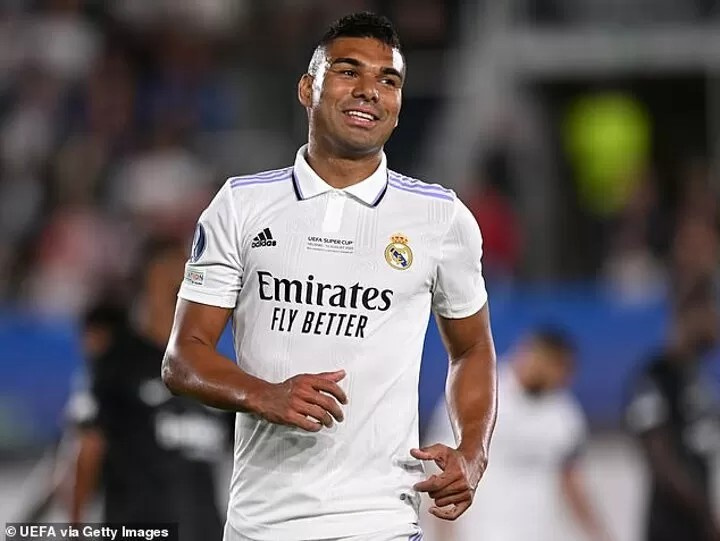 Casemiro has reportedly held a farewell dinner with friends in Spain as he closes in on a £60million move to Manchester United.
The Real Madrid midfielder has emerged as a late summer target for United, who were forced to look elsewhere after seemingly missing out on Barcelona's Frenkie de Jong.
As Sportsmail revealed on Wednesday night, the Premier League club are on the verge of handing new head coach Erik ten Hag his biggest arrival of the window so far after Casemiro agreed personal terms with Old Trafford chiefs.
Madrid have given him the green light to undergo a medical in Manchester, which will take place at the weekend before he puts pen to paper on a four-year contract.
According to Spanish journalist Edu Aguirre, the Brazil international has even held a farewell dinner with friends in Spain as he prepares to wave goodbye to Madrid and head to England.
Speaking on Spanish TV channel El Chiringuito about the dinner, Aguirre said: 'Everything indicates that it was a farewell.'
Casemiro has spent the last nine years with Real after joining from Brazilian club Sao Paulo, racking up 336 appearances and winning five Champions Leagues, three Spanish titles and one Copa del Rey.
But after helping them become European champions again last season, the 30-year-old is now set to call time on his Los Blancos stint and embark on a new challenge in Manchester.
He informed Carlo Ancelotti of his desire to join United in a meeting with the Madrid boss on Wednesday night, having been told by president Florentino Perez that he could choose whether to stay or go.
Ancelotti is bitterly disappointed to have lost one of his most reliable performers, who still has three years left on his contract at the Bernabeu.
Nevertheless, the signing of Aurelien Tchouameni from Monaco, who kept him out of the side in last weekend's win over Almeria, has threatened his position as a first-team regular under the Italian.
A United representative therefore flew to Madrid this week to enquire about a potential deal, and Ten Hag is now on the verge of landing the deep-lying midfielder he so desperately craves.
Follow us on Google news, Twitter and on Facebook
Loading...