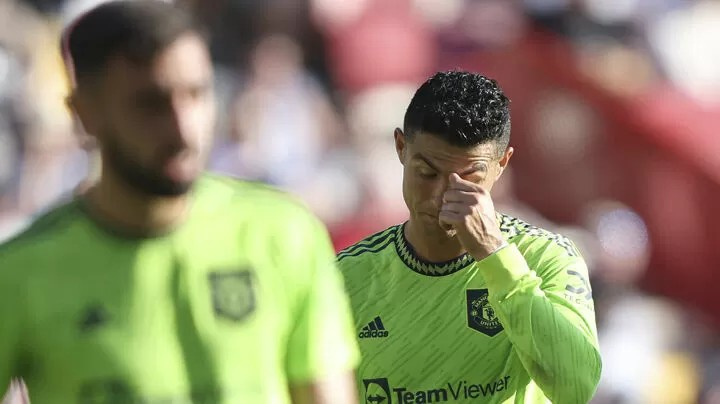 Manchester United continued their disastrous start to the 2022/23 season in harrowing fashion away to Brentford on Saturday evening.
Hopes of an Erik ten Hag inspired revival were short-lived as United fell 4-0, with all of the goals coming before half-time.
The Dutch coach had hoped to turn his fortunes around by making just one solitary change from the team that was humbled by Brighton and Hove Albion on Sunday, returning Cristiano Ronaldo to the starting XI in place of Scott McTominay.
Brentford will have appreciated United's charitable nature in the searing heat as the hosts didn't have to work hard for a single one of their four first-half strikes.
Cristiano Ronaldo was dispossessed after a laughable throw-in from the visitors, straight out of an under-9s match, and then David de Gea did his own version of physical acrobatics to somehow let Josh Dasilva's weak shot under his body and into the net.
What followed was comical. Manchester United's inability to play out from the back saw De Gea play a suicidal pass out from a goal-kick to Christian Eriksen, which Brentford intercepted and Mathias Jensen had an easy side-footed finish from close range.
At 2-0 down Erik ten Hag's team had conceded three of their four goals this season from either their own throw-in or goal-kick.
Ben Mee made it three with a header from close range as United failed to deal with a corner kick, whilst a Brentford counter-attack gave Bryan Mbeumo the chance to make it 4-0 with Luke Shaw the only defender left in his own half.
Although Ten Hag made three substitutions at half-time, there was little to no reaction from United once play resumed.
In fact, Brentford looked more likely to extend their lead, with the Dutch tactician glued to his seat in response.
United's afternoon was summed up by a rare chance in the 72nd minute. Anthony Elanga looked to be in, only for the ball to bounce off his shin, allowing Brentford to clear.
From there, the party-like atmosphere continued for the home fans, who cheered Christian Eriksen when he was given the hook in the 86th minute.
Follow us on Google news, Twitter and on Facebook
Loading...