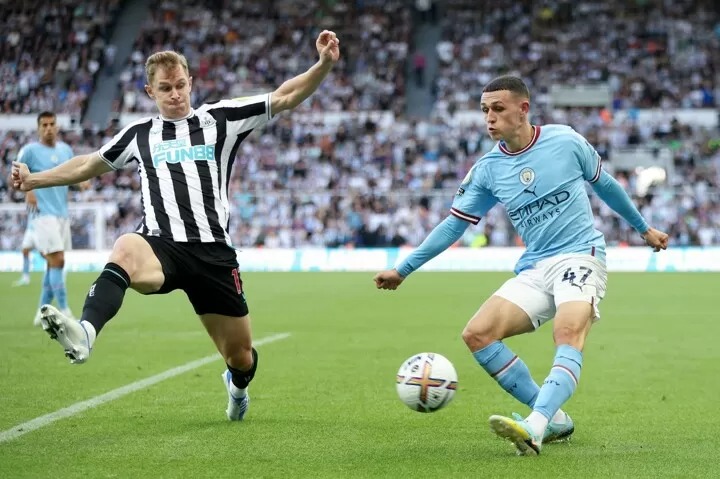 Newcastle United and Manchester City played out an entertaining 3-3 draw at St James' Park on Sunday, August 21.
Goals from Ilkay Gundogan (5’), Miguel Almiron (28’) and Callum Wilson (39’) made it 2-1 for the host at half-time. Kieran Trippier (54’), Erling Haaland (60’) and Bernardo Silva (64’) then ensured that both teams take home one point from an entertaining contest.
The visitors took an early lead after Silva drifted in from the left and found Gundogan free in the box. The German hammered his shot past Nick Pope to make it 1-0.
Newcastle got back on level terms when Miguel Almiron slid in to slot home Allan Saint-Maximin's cross from the left.
The Magpies then took the lead before half-time. Saint-Maximin got the ball at the halfway line and weaved his way through the City midfield before finding Wilson. The Englishman did well to beat Ederson and make it 2-1.
The home side extended their lead early in the second half. Trippier’s magnificent free-kick sailed into the top left corner with a fully-stretched Ederson unable to intervene.
On the hour mark, Pep Guardiola’s side reduced the deficit when Rodri nodded down Kevin de Bruyne’s corner to Haaland. The Norwegian showed good reflexes to finish from close range.
Manchester City were back on level terms four minutes later. A well-disguised pass from De Bruyne took out several Newcastle players and found Silva, who slotted past the on-rushing Pope.
On that note, here are five talking points from the 3-3 draw between Newcastle United and Manchester City:
#1. Manchester City possess too much star quality to accept defeat
Pep Guardiola has filled his side with fantastic players in each position, so much so that it won’t affect the team much if one player has an off day.
Jack Grealish was unavailable due to an injury while Riyad Mahrez settled for a place on the bench against Newcastle. Meanwhile, Julian Alvarez hasn’t been required to hit the ground running so far either.
De Bruyne, Silva and Haaland ensured that the team came back from a losing position and salvaged a point.
#2. Eddie Howie has built a strong Newcastle side
It would have been easy for the new Saudi owners to sanction a bottomless coffer to bankroll the club’s spending spree in the market. However, that’s not the approach Newcastle have gone with this summer, signing just three players so far.
They have worked with Eddie Howie to identify the right players to add to the squad and seem to be reaping rewards for the same.
The likes of Kieran Trippier, Nick Pope, Sven Botman and Dan Burn, among others, are far from 'Galacticos'. However, they have hit the ground running from the get-go since joining the club at different times.
A well-thought footballing project is underway on Tyneside.
#3. Erling Haaland could be a worthy successor for Sergio Aguero
It was considered impossible for Manchester City to replace Sergio Aguero, who scored 184 goals for the club in the Premier League.
However, in Haaland, the club may have found a worthy successor, or maybe even better.
He announced his arrival in the Premier League with three goals and an assist in his first three games. He dispelled the myths of him being a flat-track bully in the Bundesliga.
For comparison, Jadon Sancho, his former Dortmund teammate took 31 matches to score the same number of goals for Manchester United.
#4. Manchester City are vulnerable on the counter-attack
Manchester City's biggest weakness under Guardiola has been getting caught on the counter-attack, and that trend looks set to continue. Dominating possession and pushing forward in numbers leaves gaps behind, and Newcastle showed how to make use of transitions and turn defense into attack.
The front four of Allan Saint-Maximin, Callum Wilson, Joelinton and Joe Willock were so fluid that they pulled Manchester City apart on the counters.
Had a few of the passes been put together better, the Tyneside club would’ve had a comfortable lead to assure them all three points.
#5. Nathan Ake’s injury could trouble Pep Guardiola
Ruben Dias has had a slow start to the season as he’s recovering from a niggling injury. Meanwhile, Aymeric Laporte is set to remain on the sidelines for a little longer as well.
Nathan Ake stepped up to become a reliable presence in the backline. However, he has now picked up a groin injury that saw him get substituted early in the first half.
Joao Cancelo, John Stones and Kyle Walker remain Guardiola’s fully fit defensive options. Meanwhile, new signing Sergio Gomez will need time to get acclamitized to the club before taking to the pitch.
The Manchester City manager will be sweating on Ake’s injury, as anything but a ‘minor’ niggle could make the Catalan reassess his options and tactics.
Follow us on Google news, Twitter and on Facebook
Loading...