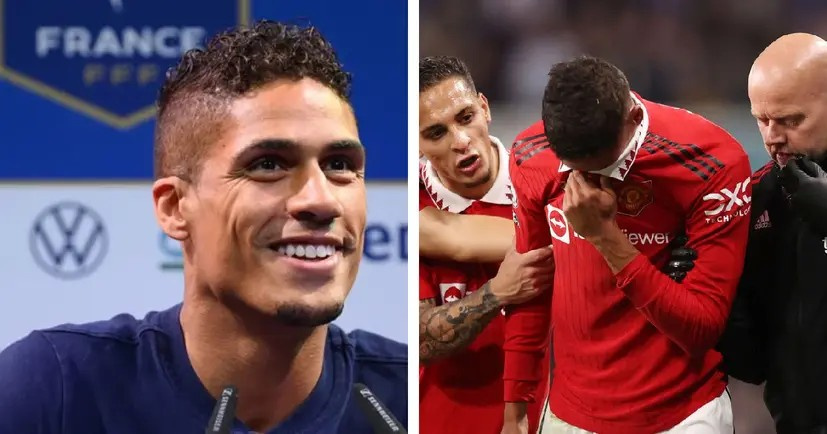 Raphael Varane said he thought his World Cup hopes have been dashed by an injury against Chelsea.
Recounting the incident, he said: “It was a difficult moment. At first I thought I had a more serious injury than it really was.
“I thought it was over for the World Cup. A sportsman’s life has ups and downs, you have to pick yourself up and come back stronger.
“I went into fast-track recovery mode, I put in a lot of effort and made a lot of sacrifices to be ready in time. It was difficult but I’m making the most of every moment. I know exactly what it means to wear the France jersey. I was desperate to overcome [the injury].”
Varane returned to action in France's 2-1 win over Denmark. With successive wins, the defending champions are through to the knockout phase with a game to spare.
Finished! France break World Cup record but Varane named weakest link
France have qualified for the last 16 of the ongoing FIFA World Cup in Qatar following a 2-1 victory over Denmark.
Kylian Mbappe scored twice as Les Bleus became the first defending champions to reach the knockout stage since 1998.
However, some fans were unimpressed with Raphael Varane's showing. The Manchester United defender featured for 75 minutes before being replaced by Ibrahim Konate.
Varane won 33% of his aerial duels and 0% of his ground duels. Here's how some fans reacted on Twitter:
Van Abdulaziz De Jong: "So Varane was the weak link. As soon as he leaves, there is composure at the back. Ibou-Upma is the combination to go for!"
Lishaxlt: "Konate x Upamecano complement each other well. Ibou wins all the duels Upa with elite passing. I don’t wanna see varane again"
Hassan D Dagan: "They need to leave this varane gimmick in the past
Michael Mbonu: "Varane is finished. I wonder why he was called . All this coaches and loyalty brouhaha"
Dotty: "Varane off and France stop conceding".
France began the campaign with 4-1 victory over Australia. They face Tunisia in their final group game.
Varane on Ronaldo drama: 'Obviously, it affects us. We follow what is happening'
Discussing the scandalous Cristiano Ronaldo interview with Piers Morgan, Raphael Varane told French radio station Europe1: "Obviously it affects us. We follow what is happening and what is being said.
"We try to calm the situation in our own way, we try not to get too involved in it.
"What is happening in the media in the big clubs is gaining momentum."
The Manchester United centre-back, who is currently preparing for the World Cup with France, added: "When it's a star like Cristiano Ronaldo, even more, so we try to take it with distance.
"That is to say, that we do not try to change the situation alone, we are part of a collective.
"What I want is the best for my team so whatever the decision, as a player, we will accept it and give the best of ourselves."
Ronaldo's interview has left a bitter taste in the mouths of fans, the club and the players as well - or at least that's what it seems like.
The 37-year-old is not expected to play for United again, with Erik ten Hag unwilling to include the Portuguese on his team.
Source: MEN
Follow us on Google news, Twitter and on Facebook
Loading...