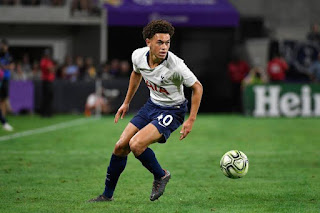 The 23-year-old London-born player Luke Ayodele Amos has sent an encrypted message to Gernot Rohr about playing for Super Eagles in the future if his latest social media post is anything to go by despite playing for England at age-grade level.

Tottenham Hotspurs young midfielder qualifies to represent three-time African Champions through his Nigerian father, but it’s England who have approached him first and he has two caps for the Young Lions at U18 level.

Amos who is currently on loan to English Championship side Queens Park Rangers where he has gone to featured 26 times in all competition this season and registered his name on the scoresheet twice.

Amos posted on Instagram with a photo of him wearing a Super Eagles training kit.

Amos does not have to apply for a change of association because the two games he played for England U18s were non-binding because it was friendlies against Switzerland and Russia in 2015.
Follow us on Google news, Twitter and on Facebook
Loading...