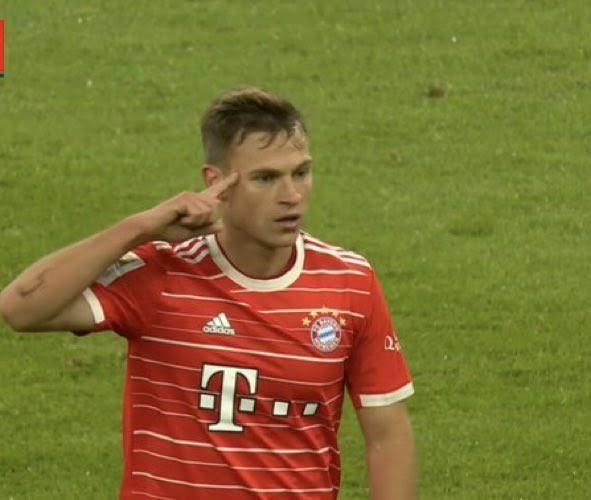 Bayern Munich left it late to rescue a precious point at home to FC Koln on Tuesday.

Going into the final minute of normal time at the iconic Allianz Arena, the current Bundesliga champions trailed 1-0.

Ellyes Skhiri put Koln ahead in just the fourth minute of play, the Tunisian midfielder converting from close-range after some suspect Bayern defending.

But from that moment on, it was essentially domination from the hosts.

Bayern had a whopping 78% possession, however, it still took them until the 90th minute to finally breach Koln’s stubborn defence.

Joshua Kimmich was the man who grabbed the equaliser – and it was an absolute stunner from the midfield maestro.

The German took aim from all of 35 yards out, with his missile of a shot cannoning off the crossbar and nestling comfortably in the back of the net.

Poor ol’ Marvin Schwabe in the Koln goal didn’t stand a chance. He could have had back-up Timo Horn alongside him and it still wouldn’t have made a difference to the outcome.

After scoring a strong contender for Bundesliga Goal of the Season, Kimmich appeared to perform Marcus Rashford‘s celebration – which is slowly taking over football.

Then dropped the celebration that’s taken over football 🫡 pic.twitter.com/cM7dzJst1o

Stop that, Joshua! It surely cannot be physically possible to hit a football sweeter than that, right?

We won’t see many better goals scored anywhere in Europe – or indeed the world as a whole – this season, of that you can be certain.