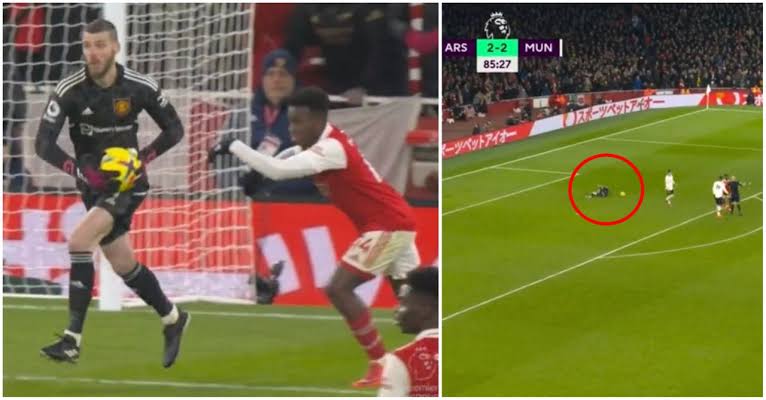 Fans are used to seeing the Spaniard diving around at the Emirates, where he produced one of the greatest goalkeeping displays in Premier League history in 2017.

He did make a fine stop to deny Eddie Nketiah on Sunday but hit headlines for different and less impressive reasons.

Five minutes before Nketiah flicked a last-gasp winner past him, De Gea threw himself to the floor when he had the ball in his possession.

He had chested the ball down under no pressure from an opponent, before getting his clutches on it as he prepared to distribute.

But as he ran, Nketiah confronted him and tapped him ever so slightly on his arm. De Gea, likely wanting to waste some precious time, exaggerated massively.

He fell to the turf and then proceeded to hold his arm and shoulder area as referee Anthony Taylor came over.

Nketiah was seen having words with Lisandro Martinez, but quite rightly protested his innocence.

A clip of the incident was shared online, with one Arsenal fan telling De Gea to "get well soon" and that there were "prayers for you right now".

Plenty of others weighed in on the discussion point, slamming De Gea for what they believe was him feigning injury to kill time.

One supporter said: "No one called this out for what it is. Not one pundit called this disgraceful. This needs to get stamped out of the game, not celebrating a goal or win."

A second added; "Professional De Gea? What is he modelling to the kids who look up to him?"

A third opined: "It’s just poetic that Nketiah scored the winning goal after this shameful stunt from De Gea."

Another weighed in: "Anyone else think they should start booking players that do this? It really is pathetic."

A fifth joked: "This career ending injury to De Gea was something! How did he play through that? Eddie was still on the pitch! Shameful from the referees!"