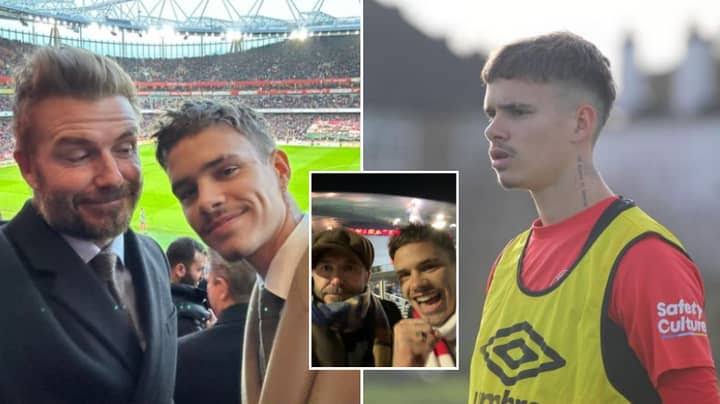 David Beckham made over 350 appearances for United during a trophy-laden spell at Old Trafford, winning six league titles, two FA Cups and the Champions League, amongst other silverware.

He did train with Arsenal for a brief period in January 2013, when then-manager Arsene Wenger allowed him to improve his fitness after leaving MLS outfit LA Galaxy.

"He called me," Wenger said at the time. "He has asked to come here and to work on his fitness. He has not done anything for a long, long time. [It's] purely for fitness. There's no speculation about signing or anything."

But Beckham speaks passionately about his "immovable" support of Manchester United – the club he joined aged 14.

He often watches United from the stands, whether that be at Old Trafford or elsewhere.

And on Sunday night, he was joined by son Romeo at the Emirates as goals from Eddie Nketiah [2] and Bukayo Saka sealed a crucial win for the league leaders, who sit five points ahead of Manchester City.

After the full-time whistle, Romeo posted a picture of him celebrating Arsenal's win with the caption: "Sleep tight dad," a comment that earned an angry response of, "Whatever" from his dad.

Romeo, who recently joined Premier League outfit Brentford on a six-month loan deal, decided against supporting the Reds – instead opting for the colours of Arsenal. But why?

Speaking to Shortlist in 2012, David revealed that the influence of Mr Wenger played a big role in Romeo's decision.

After thinking about the reasons for Romeo's decision, Beckham added: "Actually, I do know how it happened. I took him to an Arsenal game and Arsene Wenger treated him so well, gave him a shirt with his name on the back and his favourite number.

"I had that when I was a kid with Man United. I let them support whoever they want. They don't have to support the teams I played for."

Back in 2012, ahead of AC Milan's Champions League clash against Arsenal, former Rossoneri player Beckham said he was gutted when he found out Romeo supported the Gunners.

"When I found out that my son, Romeo, supports Arsenal, I became disappointed," Beckham said via Digital Spy.

"I can't bring myself to support Arsenal, although I do respect the club."