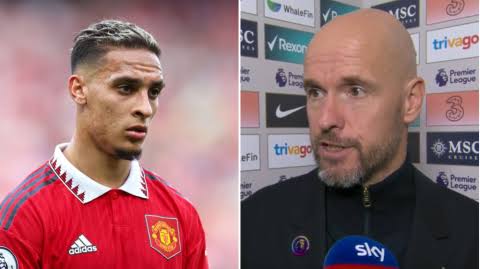 Antony has not completed 90 minutes for Man United since October 22 and is without a Premier League goal in nearly four months.

Erik ten Hag admits Antony "can do better" amid scrutiny over his form for Manchester United.

Although the Brazilian scored in FA Cup and League Cup wins over Everton and Charlton earlier this month, he is without a Premier League goal since October 9.

Antony has started in four of United's last five Premier League games as he was dropped for the defeat of Manchester City, and he has failed to complete 90 minutes since the draw with Chelsea on October 22.

United bought Antony for a fee rising to £85.51million from Ajax on transfer deadline day in September and Ten Hag believes United are a better side when the 22-year-old starts.

"I think he is not losing games," Ten Hag said. "When he is playing and the team is winning and that already gives a message of how well he is performing.

"He can do better, I see space for improvement and, for instance - and I think you notice - we want him to be more direct, more involved. But the team is performing better if he is on the pitch and that is a good thing, a good base to build further on.

"I think he already makes improvement, he scored some goals, he scored in his first three games, now he scores against Everton and Charlton, so he has an impact.

"But I think with his capabilities, with his talents he can do even more. He has a good contribution in the team."

Antony was involved in a heated exchange with Bruno Fernandes after he played a stray pass during the first-half of the draw with Crystal Palace last week.

At times, United players have appeared frustrated by Antony's self-indulgence during games but Ten Hag dismissed that particular flashpoint. "That can happen. They are both players who play also with the heart and when they bring that in the game, they are at their best.

"So it is always getting a balance, sometimes emotions slide up. In the second moment already they are good enough with each other. So that is not a problem and definitely the players are not frustrated with him."